The award was presented at the MPMA annual conference in Billings, Montana on September 14, 2018.   Executive Director Jennifer Hoesing accepted the award on behalf of Stockyards Ag Experience. “We are humbled to know our work represents the very best in our 10-state museum association,” Hoesing said. “The pieces highlight in the history of the Sioux Falls Stockyards and highlight the critical importance of contemporary agriculture to our daily lives. The award-winning pieces are still in use as our committee continues fundraising for the Stockyards Ag Experience Plaza.” 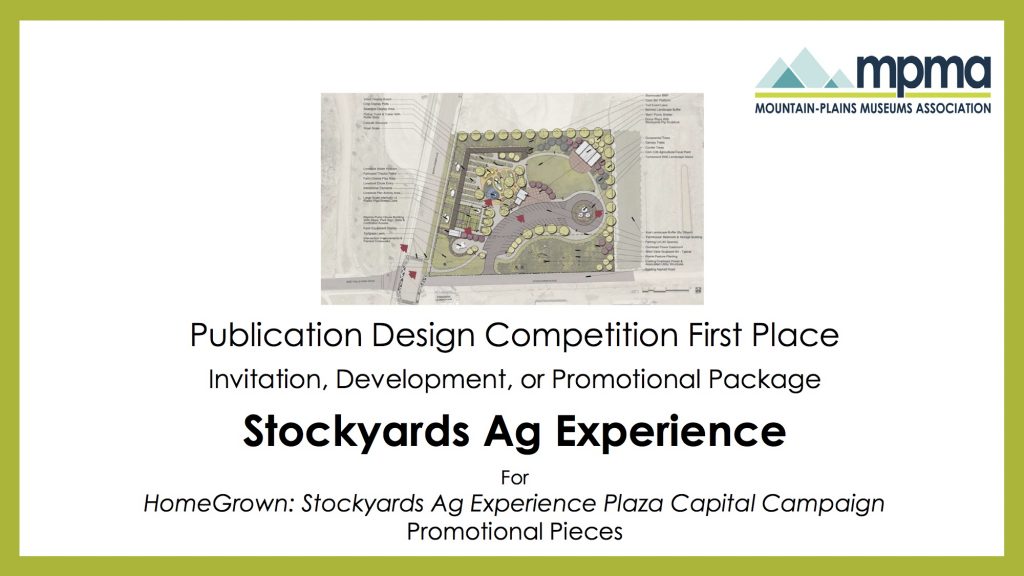 The first phase of the project is the Stockyards Ag Experience Barn. The museum, which bridges the history of agriculture beginning with the Sioux Falls Stockyards to contemporary agriculture, has welcomed more than six thousand guests from 48 states and 16 foreign countries since opening in March 2017.

The total project budget for both phases of the Stockyards Ag Experience is $4.1 million. $2.45 million has been raised to date, including $1.258 million from a Chamber-approved Community Appeal.. The Stockyards Ag Experience will next undertake detailed interpretive planning and expects to construct the Plaza in 2019 and open in 2020, following the final phase of capital fundraising.

About the Mountains-Plains Museum Association (MPMA)

Established in 1953, MPMA is a regional museum association that provides services to museum professionals in ten states: Colorado, Kansas, Montana, Nebraska, New Mexico, North Dakota, Oklahoma, South Dakota, Texas, and Wyoming. MPMA is one of six regional associations in the United States that work in conjunction with the American Association of Museums.

About the Stockyards Ag Experience