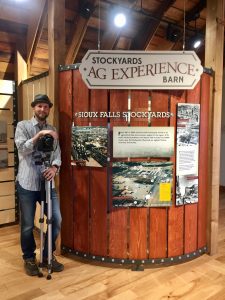 Many Stockyards Ag Experience guests share their personal connections to agriculture when they visit. We’ve decided to feature some of them here.

Earlier this week, Brian Rotert stopped by the Barn to take a few photographs as a part of his architectural photography work with Cipher Imaging. We visited for a minute and it was clear to me that he had a deep connection to the Stockyards. Brian explained that as a kid growing up in Salem, about 45 miles west of Sioux Falls, he often joined his dad on trips to the Yards. His memories include that precious time spent with family, and moments of excitement on the Cliff Avenue hill with a load of livestock. “Growing up on the farm gave me a certain entrepreneurial spirit,” Brian said. It’s that spirit that led him to create Cipher Imaging. Brian said he drew on the foundational aspects of his farm upbringing to create the business. The idea of the farmer versus the elements and connections to the land and those who passed through before our time were especially important themes. I asked Brian why the Stockyards Ag Experience project important to him. Brian says it’s telling the story that’s important: “people will be able to see what dad and I did both at the Barn and in the future, at the Plaza. They’ll understand agriculture’s impact in our community and region.”