Today we continue our Stockyards Stories series, featuring our founder and board president, Jim Woster. 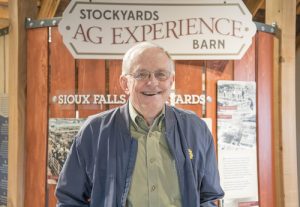 From his first day at the Sioux Falls Stockyards in 1962, Jim Woster knew the Yards was an exceptional place. Following his graduation from South Dakota State University, he began his Stockyards career with the Sioux Falls Stockyards Company, followed by two years in the cattle alley with Farmers Union Livestock. Jim returned to the Yards after a few years in graduate school at SDSU,  working as a cattle buyer for Greenlee Packing Co. On March 1, 1971 Jim began delivering market reports on TV and radio, which he did until 1982. He then purchased an interest in Olsen-Frankman Livestock and worked in the cattle alley before selling his shares to David Frankman in 2003. In sum, Jim spent more than 40 years working at the Sioux Falls Stockyards.

In retirement Jim has continued advocating for agriculture, entertaining and educating all across the great state of South Dakota and far beyond. He is also well known as a voice for agriculture, and for his roles with South Dakota State University and Avera Health. Jim’s service to the community is front is center with his Stockyards Ag Experience leadership. Jim founded the Stockyards Ag Experience, so the Barn and Plaza could serve “as a reminder that the Sioux Falls Stockyards, our customers, and all of the related industries were indeed very special.”

Jim, all of us here at the Stockyards Ag Experience agree: you’re very special, too.