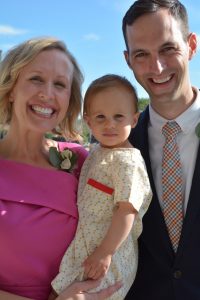 The Sioux Falls Stockyards profoundly influenced not only generations of customers and employees, but also their families and friends. That’s certainly true for Paige Pearson Meyer. Her ag background and memories of time spent at the Sioux Falls Stockyards with her dad endeared her to the project. “The Stockyards Ag Experience project is deeply personal to me,” Paige told me. “It’s a tribute to my Dad’s history at the Stockyards and my childhood of growing up on the catwalk and in the Cattle Arena.”

Raised on a ranch just north of Sioux Falls, Paige’s roots are in agriculture. Her dad, Darry Pearson, was President of the Sioux Falls Stockyards and delivered market reports on KELO throughout her childhood. In addition, Darry raised club Suffolk sheep from the mid-1970s through the 1990s. As a young girl, Paige began showing sheep at the Sioux Empire Farm Show, where she would lead her ewes around the ring with a halter. Though that experience, Paige says she realized she wanted two things: “to win and to be a master showwoman.” Paige credits her dad, an expert at show animal preparation, with her continued successes at 4-H and open shows. 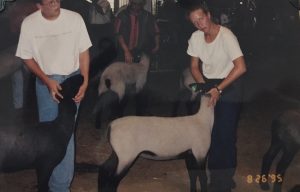 Paige left South Dakota for college and remained out of state to begin her career. She worked in broadcast journalism for 10 years, a stint that included working the sideline at Lambeau Field and covering the Packers in the Super Bowl. She returned to Sioux Falls in 2012 as a news reporter & anchor for KSFY.

Today Paige continues telling stories in her role as Director of Public & Media Relations at MIDCO in Sioux Falls. In addition, she serves on the Stockyards Ag Experience Board, the Young Professionals Network steering committee and has been involved in capital fundraising for her church among many other volunteer roles. Paige makes her home in Sioux Falls with her husband, John Meyer, and their young daughter.

The Stockyards Ag Experience bridges Paige’s deep, abiding respect for her ag background (especially ag’s long history in Sioux Falls) with building opportunity in our city today. “[The Stockyards Ag Experience] speaks to what my husband and I are committed to – helping build a family-centric, inclusive community where people of all backgrounds can come together to engage and enjoy,” Paige concluded.